Myth 1: Latex balloons do not pose a threat to the environment.

It is a well-known fact th 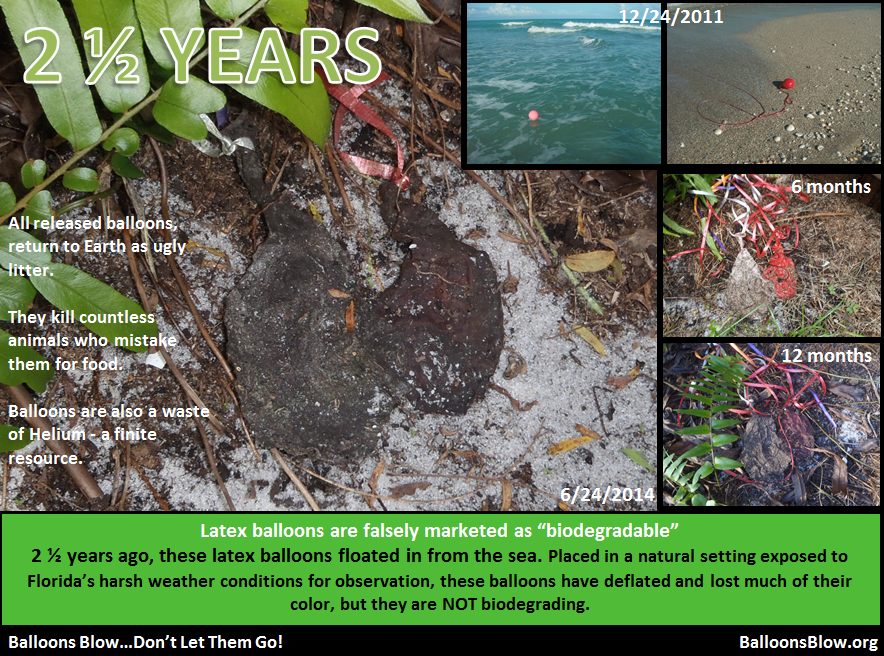 at foil and "Mylar" balloons are not eco friendly. However it is common for many retailers to state that balloons made from rubber latex are eco friendly - because they are biodegradable.

When a latex balloon is created chemicals, plasticizers and artificial dyes are added - many believe this makes them non-biodegradable and instead degradable.

The Balloon Council, an international network of manufacturers, distributors, decorators, retailers and entertainers for the balloon industry, claim that balloons pose no threat to wild life and are biodegradable, decomposing at the rate of an oak leaf (which can be up to 4 years).

But there is a growing voice of discontent.

Many environmental organisations complain wildlife - from sea turtles to farm animals to birds - mistake latex balloons for food. The animal that dies from ingesting it is usually killed from the balloon blocking its digestive tract, leaving them unable to take in any more nutrients. It then slowly starves to death. The animals can also become entangled in the balloon and its ribbon making the animal unable to move or eat. 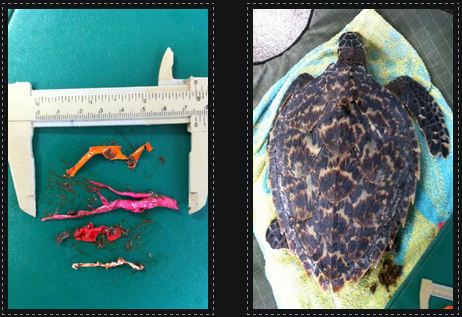 dedicated its cause to providing information to educate others of the dangerous effects balloon releases have on the environment.

Most balloon enthusiasts are in the balloon business. They profit from the sale of balloons. They encourage people to disregard everything scientists, wildlife rehabilitators and conservationists are reporting about the impacts balloons have on animals and the environment so they can continue to profit from balloon releases. There are other ways to sell balloons than to encourage balloon releases, but mass balloon releases bring in big profits.

We find many more of these so-called “biodegradable” latex balloons, perhaps because the balloon industry has promoted this false information. Some understand that mylar (plastic foil) balloons are harmful to the environment, but are led to believe that latex balloons are environmentally friendly. The above picture proves they are not.

The balloon industry  has set “standards” for themselves claiming that releasing balloons that are hand-tied, so-called, “biodegradable” latex balloons without any attachments of ribbon is environmentally friendly. The balloons pictured below were released to their standards. Some are months old, some are years old. Natural latex may be biodegradable, but after adding chemicals, plasticizers and artificial dyes, how natural could it be? It may degrade after several years, but it’s surely not “biodegradable.” 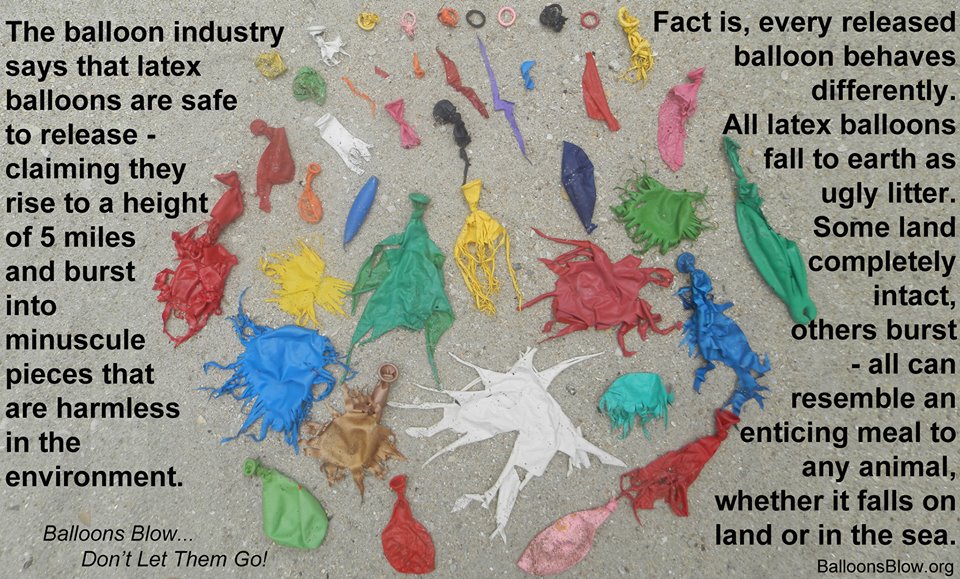 Myth 2: All Paper Cups and Plates are compostable and biodegradable.

Many people think that because a cup and plate is made from paper it is compostable and suitable for the compost bin. After all it is made from trees, right?

They are most likely unaware that in fact the paper plate or cups they are using contains a paraffin (petroleum-based) wax or polyethylene (PE) plastic coating. These coatings are used to insulate the product.

Many waxed paper products have non-compostable synthetic additives added to it to make the wax more water resistant. As paraffin is not derived from vegetable oil, but from petroleum, it is not digested by higher organisms.

And of course we all know plastic polyethylene can take hundreds of years to degrade, if at all.

Myth 3: All disposables made from biodegradable polylactic acid (PLA) are good for the environment.

Bio-based plastics are polymers made entirely from annually renewable plant resources instead of from petroleum, which is what conventional plastic uses.

Bioplastics were first manufactured by Natureworks LLC in America in 2001 and used in bottles three years later. They are biodegradable and compostable in commercial composting facilties.

All good so far, yes? Here's where it gets interesting.

PLA is a clear bioplastic suitable for the manufacture of water bottles and strawberry punnets (and other commonly recycled plastic products), which can substitute for polyethylene terephthalate (PET) one of the most used forms of plastic.

However, when PLA is used in bottles and strawberry punnets, it can potentially displace bottles made from PET, for which there is already a thriving recycling system for PET. Disrupting this system is harmful for the environment as the recycled plastic system saves millions of tonnes of plastic every year from landfill.

NatureWorks commissioned an independent third-party study to better understand the recyclability of a PLA bottle, or other PLA product, to determine the material’s impact on the current waste collection stream. Based on initial research, it concluded that PLA was a neutral contributor in the existing recycling stream and can be effectively sorted using available detection technology.

The concern is that this detection technology is not thorough enough for detecting a PLA bottle from a PET bottle.

The majority of recyclers have no issues with PLA in food service ware - like cups, plates and cutlery - for which there is no existing recycling infrastructure. NatureWorks has yet to propose one that would work.

Unfortunately there is no known economically based system to recycle PLA bottles and as it is not mandatory to use PLA in bottles and other commonly recycled plastic products it is therefore not wise to continue making products with bioplastics if they can be easily mistaken for recycled products made from non-biodegradable plastic.