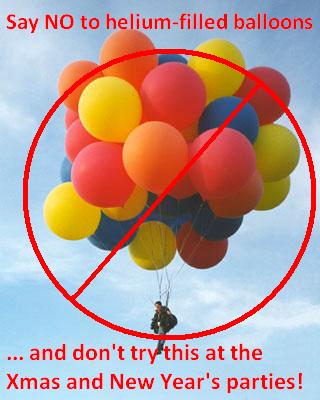 With Christmas and New Year’s celebrations fast approaching we thought it important to inform our blog readers about the dangers that the lovable latex balloons pose to the environment if not disposed of properly.

Our stance on balloons has been updated (June, 2014) and we no longer stock balloons. See links here and here for more info on how and why that came to be.

As eco party lovers we have witnessed many compelling debates for and against offering latex balloons to our customers.

This blog talks of the only eco friendly balloon - that is those made from latex, a renewable sap-like extract from the Hevea brasilienesis rubber tree, found mostly throughout Asia and Africa.

We gathered our information from a variety of credible online sources (see the bottom of this article for links) as well as the International Balloon Association (IBA) and Balloon Council (TBC) - both international networks of manufacturers, distributors, decorators, retailers, and entertainers for the balloon industry established in 1990.

In short the conclusion we came to is that it’s not the balloon that does the damage, it's how the consumer disposes of it. The risk to the environment is not IF latex balloons biodegrade, because they do, but WHERE they end up.

Unfortunately the rate at which latex balloons biodegrade is often misrepresented. Many websites dedicated to defending balloons state 6 months for decomposition, others claim “at the rate of an oak leaf” which is not entirely specific. Others who claim to have placed a balloon in their compost report at least two years for total results. Ours are decomposing in an open compost in our back yard and have faded a little since they made their way there in May.

Like with all compostable materials the rate of decomposition is dependent on the weather, how much sunlight it is exposed to and the general composting mix - but the fact is latex balloons do biodegrade. Research shows the degradation process begins almost immediately. Oxidation, the “frosting” that makes latex balloons look as if they are losing their colour, is one of the first signs of the process. Natural microorganisms attack natural rubber even in the dark.

Our concern was if it is a biodegradable product is it ok for the compost?

The best description on the manufacturing process of latex balloons painted a picture of a non-toxic biodegradable product: (Source is www.madehow.com/Volume-2/Balloon)

* Additives are combined with the natural latex to prepare it for the industrial processes, along with other particular chemicals and substances, such as curing agents, accelerators, oil and water, that focus on the thickness of the balloon and the drying rate;
* Anti-degradants are additional chemicals combined to the latex mixture that help to slow down the oxidation and decomposition of the rubber;
* Prior to the latex mixture, the balloon mould must first be dipped into a coagulant solution. The most common coagulant solution is a mixture of water, calcium-based salt, soap and talcum powder;
* To give it color, pigments are mixed into the latex. The pigments may be fine metal oxide powders or organic dyes;
* While balloon makers also reclaim much of the coagulant that ends up in the leaching solution. Unfortunately, what is not reclaimed ends up as liquid waste in the environment.

As distributors of quality 30cm latex balloons made by an Australian company it is important for us that all latex balloons end up disposed in the right place: that is either in a compost, a hole in the garden or at the very least in the garbage bin. Certainly NOT released into the air with helium or left on the ground to decompose.

Despite the balloon industry’s reassurance that very few animals have died directly from mistaking balloons for food it is hard for us to fathom that poorly disposed of balloons do not pose a direct threat to wildlife.

Indeed this is our main cause for concern. Despite also being a choking hazard for small children, and indeed some little ones have suffocated from the remnants of balloons, it is the poorly discarded balloons and those that make their way into natural eco systems after being released into the sky with helium which have environmentalists calling for them to be removed from the shelves.

One of the major organisations calling for a ban on latex balloons is The Sea Turtle Foundation (www.seaturtlefoundation.org/stf-current-projects/campaigns/marine-debris/). It points to balloon releases having been banned in many places, including New South Wales, Plymouth City and Lancaster in the UK and Florida, California and Texas in the USA.

“Hundreds of balloons ascending into the sky can be an amazing sight. However people seldom think what happens to all those balloons once they return to earth. Few people realise that a balloon release that is over in a matter of minutes, leaves a legacy that remains for months, if not years.

“Balloon litter floating at sea can be deadly for many animals. Sea turtles are particularly at risk as they mistake deflated balloons for their jellyfish food. Swallowed balloons block their gut and lead to death by starvation. Entanglement and subsequent drowning for baby turtles is an added risk. These risks also affect other marine wildlife like seabirds, dolphins and fish.

… balloons floating in seawater can take up to twelve months to degrade.

Sea Turtle Foundation is calling for a total ban of balloon releases worldwide.”

On the opposing side Balloon Artists and Supply Association of Australasia (http://www.balloonartists.com.au) says:

"There is simply no basis for any fear that animals and fish are consuming either whole balloons or pieces of latex rubber from mass release balloons, or that balloons are having an adverse effect on wildlife.

BASA claims it makes these observations based on:

* Extensive US studies which fail to show any link between balloon consumption and wildlife death;
* Lack of any evidence from Australian fishermen that they ever find mass-release balloons, or balloon remnants, in fish that have been caught;;
* No observed balloon litter in any environment which is carefully monitored by Government authorities – e.g. national parks, marine parks, forests, harbours and foreshores;
* Surveys by oceanic countries which show no balloon or latex rubber debris in litter surveys following mass releases in Australia;
* Observations from widely-scattered observers involved in the www.balloonhq.com/faq/deco_releases/release_study... *Keep Australia Beautiful" programs; and
* Controlled monitoring and tracking of multi-balloon releases for the purpose of measuring any litter problem.

(Read the report at www.balloonhq.com/faq/deco_releases/release_study...

In summary we acknowledge the advice The Balloon Council and International Balloon Associations’ provide on actively encourages consumers about safety concerns surrounding balloons. That is:
* Follow industry guidelines for balloon releases — use only hand-tied latex balloons and no plastic attachments;
* Never release mylar balloons;
* Never attach metallic ribbon to helium-filled balloons. An accidental release could become tangled in power lines and might cause a line fault;
* Always supervise young children under age 8. Never allow children to play with deflated balloons — or broken pieces — which could cause choking or suffocation;
* Always attach weights — mug, vase or heavy object — to helium-filled balloons to counter lift and prevent accidental release;
* Properly dispose of balloons. Cut balloons with scissors directly above the knot or sealing point and immediately place in trash containers;

Finally, while it is our sincere belief balloons can potentially do damage to the environment and wildlife, it is ultimately in the consumers hands and how each of us disposes of them which make them environmentally friendly or not.